Rishikesh, Ashrams and how we met Sophie

Rishikesh panorama on the Ganges
As life goes on, new projects and ideas are popping up on our to do lists, there is still a piece of the India adventure in us, the part that lives inside and develops in certain directions. Together with that, there are a whole bunch of friends who we met there and enriched our lives. Let us introduce you Sophie, our paths had crossed in Rishikesh and continue crossing in Europe. Her story alone is very inspiring, but now she will tell you how we met and shared a part of our journey together.

cunning monkey above the bridge

“Wow… I can’t believe it’s been more than a year (AUTHOR’S UPDATE: 2 years…) since I first met Ania and Anto! I first heard from a fellow hitchhiker and mutual friend about this fascinating couple and their trip in India, a few months after I had arrived there myself. I had been in Rishikesh for a few weeks already – trying to get back on my feet after repeatedly drinking non-drinking water in Tamil Nadu had had nasty consequences on my ability to digest food – when we started communicating and, miraculously, finally met. « We’ll be in Little Buddha Café » (the most crowded, less lit café in Rishikesh) « We’re both very tall and Anto has dreadlocks ». And there they were.

So we spent the next days doing what we do best: resting, eating and talking about our experience of India and life before India, and sharing hitchhiker love.

I had  been travelling relatively low-budget, so I was curious to learn how more experienced nomads did it. They introduced me to a friend that had made in the wake of their recent Vipassana retreat, Vipin, with whom I developed a close relationship. I partly owe him my recovery and also the birth of a yoga routine into my life. I introduced them to another close friend I met in Rishikesh. Ania and I had lady talk European style and we tried to figure out where in Rishikesh she could get a salwar kameez (traditional North Indian garment) as the one I was wore. Anto introduced me to the cinnamon bun from the German bakery. Already, the magic was working and meeting Ania and Anto meant big change in my life.

And that was before we hit the road together.

At the end of April, we set off for an ashram that had been my destination for months but I was a bit shy to go there by myself. Google maps indicated 369km, 8 hours 45 minutes. Off we went up the mountain roads of the Himalayan foothills. We hitched a truck, couldn’t have squeezed yet another person into it. We had lunch at a trucker food stall by the side of the road. We were picked up by a man and a woman who had left their spouses behind to breathe some fresh Himalayan air together and got fined for mysterious reasons. We reached the town that marks the beginning of the Ganges and the hills started looking more like mountains. The road was curvy and with every car we crossed, I wondered at the eternal miracle of non-existent collision on the narrow Indian roads. We arrived in some village for watermelon break. Then we were picked up by a business man who drove us far… The road became worse and we could see the bed of a torrent to our right, a torrent that had brutally flooded everything on its path a couple of years back, because of a cloudburst… Even metal bridges had been torn away. I caught my breath at the thought of the human disaster that every driver evoked. 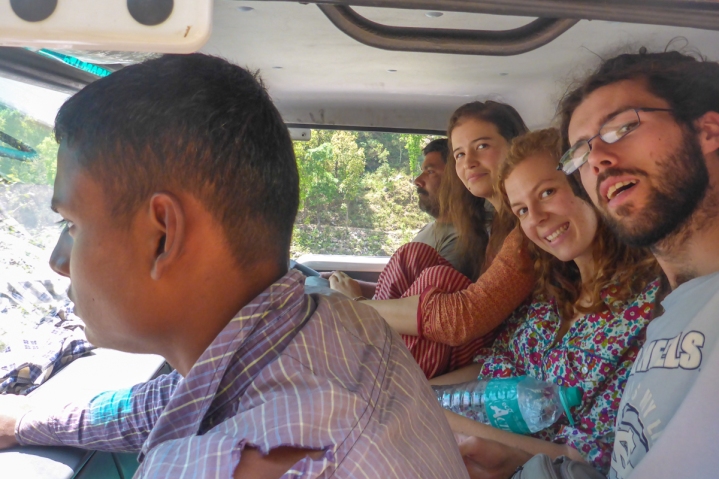 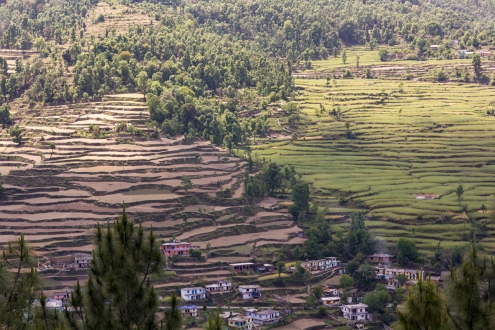 Eventually we reached Srinagar. It was dark. I felt down. I even felt somewhat unsafe; some people were offering us to stay in their lodges but they all were expensive and decrepit. I was at a loss for what to do, a rather unusual and unsettling thing for me. We walked… Towards a place brightly lit that could have been a hotel. A wedding was about to happen. Anto and Ania inquired whether it would be possible to stay there, but the place was not only booked for the wedding, the rooms were insalubrious and clearly the place had been uninhabited for a while already. Anja resorted to telling the man whom we were speaking with that we were just looking for good people and a place to sleep – anywhere. After a few minutes, he asked: « Anywhere? Even with my family? ». We could not have been happier. We waited for him to finish work, then went with him to his home. It was up on the hill. His family welcomed us – they were extremely friendly, offered us tea and water… We met their dog… And then went up the stairs to the rooftop. The view was beautiful. They let us use the bathroom and brought more covers than I ever would have thought their house could contain – we had everything for a comfy night, although for myself I could have done without considering the gorgeous view of the stars. I did my asanas and fell asleep like a log at midnight. 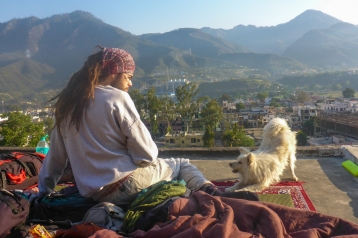 The dog woke up my two companions at dawn and tea soon followed. The family offered us toast and jam – friendly as ever. We regretted that their knowledge of foreign breakfast habits prevented us from enjoying the same food as them. After taking a few picture with them, the plain and the city in the background, we set off.

I don’t remember much of the rides we had that day but I remember that the mountains grew bigger, the air fresher and there were ever more pine trees. The views over the terraces some communities built in order to farm the land were breathtaking. We crossed paths with a minibus driven by Westerners a couple of times, but they did not stop, so our wild guesses about their identity remained unchecked. A business man picked us up and bought us lunch – parantha. We encountered roadworks and were stopped for a half hour or so.

We observed the road workers who were carrying large bags of stones and gravel on their backs, held up by a belt resting on their foreheads. They worked hard. They seemed very young – some of whom appeared to be underage male and female Nepalese. Our hearts sank. « About your salwar kameez, Ania, I guess you could have it made in Nepal. It would probably be cheaper. » We winced at the incongruity of life. Then the car started again and we drove away, past sadhus (wandering monks) walking bare foot on the edge of the dirt road, carrying next to nothing with them.

At some point, we waited for what felt like a couple of hours in front of a garage and it felt like, you know, hitchhiking stops here, it will never work again. That’s when we were picked up by two business men headed to Almora, close to our destination. They proved to be very interesting conversation partners, although I fail to remember what we talked about, besides the wife of the one on the passenger seat, a singer.

When we got to Almora, we had had plenty of time to introduce him to Ania and Anto’s means of travel and he offered to speak to the people at the local gurudhwara, as he spoke some Punjabi. And so he did, until the old Sikh let us stay there. It was agreed that we would all pay a small amount – it was late, we were tired and thankful. I remember the place as very atmospheric, a large room with a bathroom and a kitchen on the side, where our host cooked for himself. The next morning, we walked through Almora – it was India, but different from the India I knew… A mountain city. And off we went – Dol ashram was but a few hours away now. I didn’t think that many surprises would expect us on he way. And yet…

We were picked up by a medical doctor. Ania was happy to find a conversation partner well versed in her field of expertise. We soon found out, however, that anatomy, in English at least, was not his strong suit. We silently worried about his patients. One mountain village after the next, the landscape was staring to feel pretty monotonous… Until the car stopped. Why did the car stop? We got out and looked around – our first view of the Himalayas. In a split second’s time I thought of everyone I knew and how I wish I could share it with them. The mountain range was out there in the distance, as if they were floating in the air, like a dream come true. 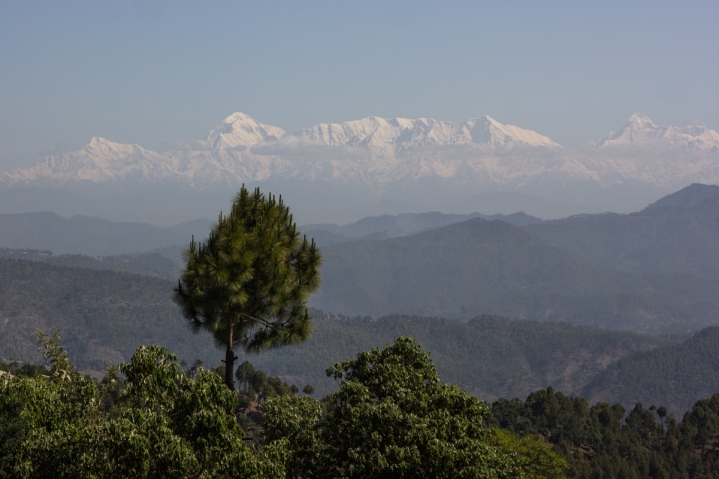 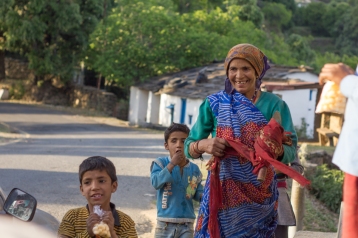 Traffic was getting rare. Standing just outside a small village, we hitched every vehicle and that, ladies and gentlemen, is how we ended up on a large new bright yellow mechanical digger. Awfully uncomfortable as well as absolutely brilliant. We enjoyed the landscape to the maximum of our capacities. The ride came to an end too soon and we continued to the ashram. Nature became softer, very green, the mountains slightly less high. And then we saw it. How could we have missed it? Huge. Bright pink in the heart of the green mountain side. The place I had daydreamt about for months – there it was. We got off the car and walked the dirt road to the ashram though the forest. 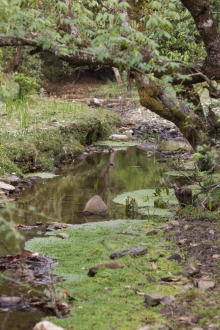 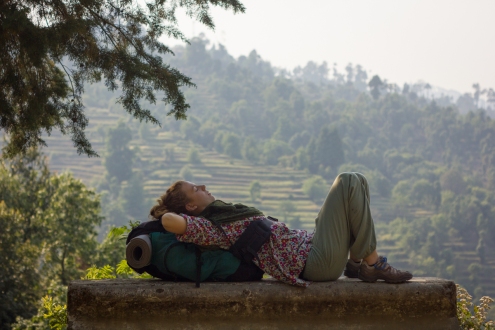 I leave Anto and Ania tell the rest of our time together – for I embarked on a wholly new adventure the second I crossed the gates of the ashram. 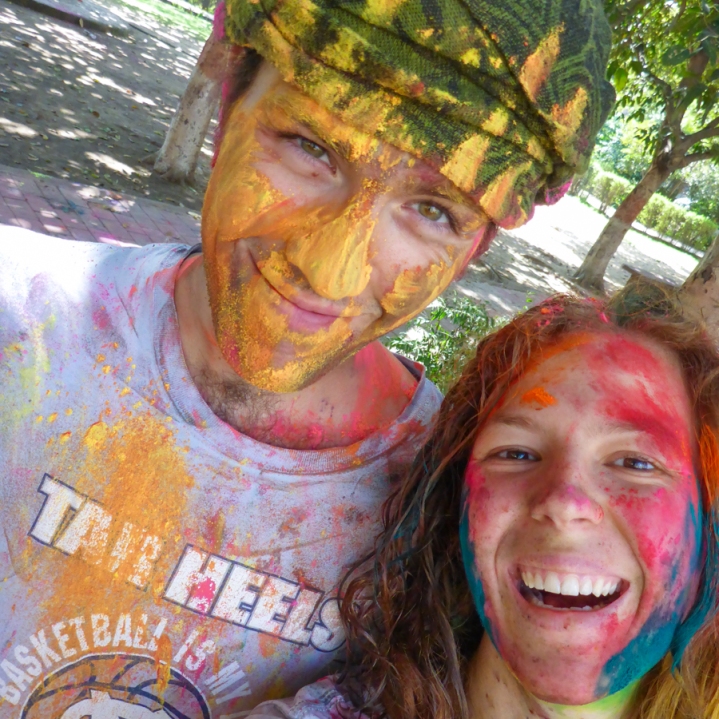