First hitchhiking in India! What a mindblow!

Our new friends in the park
We covered the first distance by train, we wanted to start the Indian journey with baby steps. Getting the tickets was actually way more tiring than hitching through the whole Germany back in Europe.  But eventually we got to the green Bangalore and to the house of our CS host and new friend Romain. We had fun slack lining in the park and it’s from there that we felt ready to hitchhike and let the road decide where to end up.

Yeah! We had the general direction – Auroville on the east coast. It is close to Pondicherry where this Patel guy from “Life of Pi” comes from. The only things we knew about “moving by lift” in India were:

it is very slow,

WORKS! That was enough for us!

Cities in India are giant, very polluted and confusing. By the time we got to the hitching spot I was soaked in sweat. Who cares, we are in India. Everything smells anyway! In the outskirts of the city we see few very cheerful prostitutes/transsexuals/eunuchs entertaining or rather annoying the drivers at the traffic lights. All right! It is time to start our first thumbing! Burning sun, absolute chaos, smoggy fog, one constant BEEEP, trash burning around,walking cows, lots of confused Indians and our THUMBS UP. Actually we did not use thumbs first until we made sure it is not an offensive sign (like in Iran).

That day was so much fun! We were picked up by a police car, an ambulance, two motorbikes, and lots of short rides with the locals. Hitchhiking was smooth, we did not wait long, and people in the cars spoke English. At some point we chose to go on the countryside road and…there were no cars anymore! The first look at the indian villages will stay in my mind for long long time. Everything seem to have its own rhythm: women carrying water and wood on their heads, naked kids playing around the fire, tiny little bamboo huts , rice fields and extreme poverty. Yet 70% of Indians live in the countryside.

In the police car

The most tiring for us was convincing our drivers that we do NOT want to take a bus, they all insisted to take us to the bus stop and seem not to understand that lift is our mean of transport. Muslim social workers from the ambulance that picked us up even succeed in that and the bloody red sunset we observed from the local bus seats. That was when we also saw the monkeys chilling out in the shadows for the first time! How lovely and cunning they looked!

The place we ended up was called Tiruvannamalai. Later on we learn that it is well known for its spirituality. There is one of the biggest Shiva temple in India and a couple of Ashrams. We had the idea of sleeping in the corner of the sacred place and leave in the morning towards Auroville. Westerners we asked on the way discouraged us saying that everyone books a place in the Ashrams some 3 months in advance. It is worth giving it a shot anyway- was our thought! We stood in the gate of Ramana Ashram confused and lost when one middle aged Indian man approached us asking if we need help. 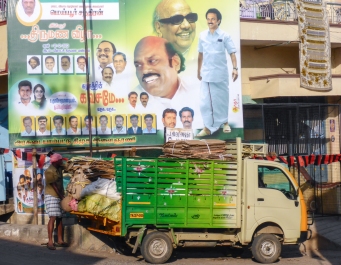 And this is the way we met Shiva, a beautiful person with whom we spent the next three days. He took us home and offered hospitality. For the next days we were breathing the atmosphere of peaceful Tiruvannamalai and in the evenings had long spiritual discussions with our new friend. We felt good: excited but reassured, calm, aware, happy. 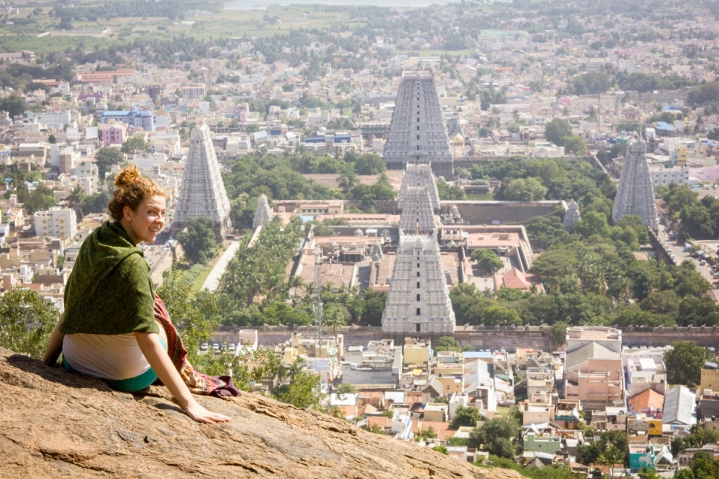 Shiva shared his breathtaking lifestory: how he left his Bramin’s family, chose the spiritual path, stayed in the Himalayan’s cave for years,travel the country on the bicycle and many many more. We learned a lot about hinduism, its tradition, stories, beliefs. 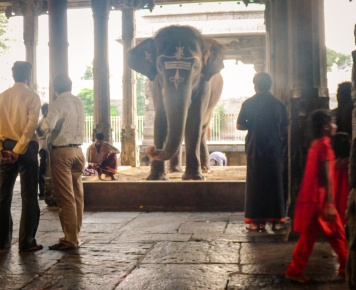 Our first Elephant, as impressive as sad

For the first time in India we felt “Oh man, this is exactly what we are looking for! This is the reason we are here, this is India we are expecting, this is the way we want to see this country!!!”

‘Hitching on the highway’